The MUSE instrument is a giant 3D spectrograph consisting of 24 IFUs. It will be put on the VLT next year and be operated by ESO. But it is not built by ESO, it is actually built by a consortium of 7 institutes across Europe. Each institute has its own duties and contributions to the telescope, which is being assembled at CRAL. The AIP has already delivered the Calibration Unit (lamps, masks and other optical elements) and handles the Data Reduction Pipeline, which will also be delivered to ESO next year. This also is the part I am currently mostly working on and why I often talk about the MUSE instrument and data reduction.

As part of building the instrument, the institutes that are part of this consortium that is building MUSE get a significant fraction of guaranteed time observing (GTO) with it. It is about 40 nights per year, with some options to shuffle the nights around in the semester to aleviate pressures on certain RA range. That is a lot of time! And a lot of data! And considering the complexity of the instrument, its 24 IFUs and the variety of lightpaths a large computational challenge. So the consortium wants to make sure that they not only get the best science, but that they are prepared to handle the challenges that come with such a huge and complex dataset.

For that reason every 9 months or so we have scientific busy weeks. These are designed to bring to the table the best science cases possible for the GTO proposals. MUSE is an instrument that will go very deep, covering large fractions of sky at high redshift. One of the main scientific drivers is the unbiased detection of Lyman Alpha Emitters (LAEs) at all redshifts without being constrained by narrow band filters. But there is so much more science to be done with those deep observations (fluorescence, accretion flows, absorption systems, mid-z low luminosity systems, etc.). The same goes for the case in nearby galaxies. The MUSE science busy weeks make sure we are up to date with the newest results that could impact these observations, to prepare the best targets and to double-check that we have all the ancilliary observations and analysis tools to produce the best GTO science possible. 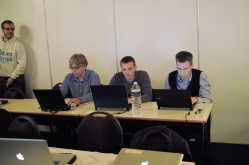 Since my main task is concerned with the data reduction side, for the scientific team that means that people working with the data understand the reduction pipeline and its outputs according to their needs. In the past it was to give them an overview of the recipes and tell them about the process that was being made. But now we are actually at a point that we can do tutorials and let people play with the pipeline themselves on mock or lab data. The past half year I have spent writing an user manual and cookbook for the end user of the pipeline. I don’t know if ESO will take on this manual, but at least in the consortium we will be constantly improving it. In the tutorial I already received enough comments and improvement suggestions so that I have enough to do for the next few weeks. We also envision these sort of tutorials becoming more frequent to potential german users of the MUSE instrument (german taxpayers are paying my salary, after all). Sort of like “MUSE Community Days”, but I am not entirely sure about the format or details. 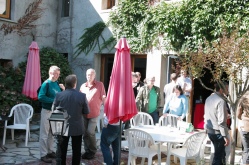 But besides the technical and the logistical side of these Busy Weeks, the consortium really has gotten together as whole. One of the conditions for a member to put forward a suggestion to tackle a certain observation was that at least aother institute was involved in the project, too. As such, lots of collaborations and even friendships have been formed. People have stated to work together on similar or preliminary science to the proposed MUSE ones.

Another aspect of the Busy Weeks is that we are often in “secluded” locations, so that we don’t get distracted and are only amongst ourselves. There is no possibility of attendees to retire to their office or home. We are all in the same hotel, we all eat together, basically “forced” to talk to each other. On Wednesdays there usually is a hike. All this to say, that by now, the members consortium know each other quite well and there is also happiness of seeing some people again. 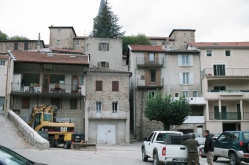 This time the Busy Week was at a hotel in Satilleu, near Lyon in the Ardeche district of the Rhone-Alpes region. The area is sort of hilly, but not extreme. The villages are not that abundant, but in the two we stopped (Satilleu and the bigger Annonay) the houses are made out of stone built close to the hill with small and windy roads curling around them. So the scenery was beautiful, but “there was nothing there”, not even some spectacular natural scene. So we spent our free time walking around, playing mini-golf (provided by the hotel), surfing the net or having some beers in the late evenings. The food in the hotel was quite good, as opposed to the last Busy Week and I looked forward to the long conversations over wine and cheese after dinner. 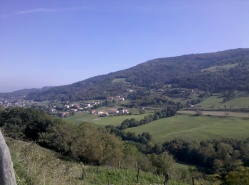 The Busy Week itself went fine, too. I think the tutorial was a success and it finally gave some people the opportunity to work with the pipeline for the first time and take away any initial fears of working with the data. I am very proud of all the things my institute has put out with regards to the MUSE project, so I can say that from our side it was a productive week. There were other tutorials and presentation of analysis software in different stages of execution. There were one and a half days also dedicated to science talks and suddenly it felt like a conference, too. I was looking up papers and listening to people present their results and how it could apply to MUSE observations.

So I would call this week a success. While I was totally beat at the end of it, I also was inspired to keep on working on MUSE stuff here at the institute, knowing that it was being received well.

One funny experience I don’t want to forget either is me driving the AIP people back and forth from the airport in a small bus. Maneuvering the bus through unfamiliar and narrow roads while we argue over the loudness of the radio and the comfort level for the last row participants and whether we should buy goat cheese and which freeway to take and… ah, good times.