My computer crashed! Now, with a new computer, I am quickly updating the blog posts which I had either written up or were in the pipeline. Please excuse the lateness…

Last week there was the 9th Thinkshop in Potsdam with the theme “Galaxy surveys using Integral Field Spectroscopy: Achievements and Opportunities“. These so-called thinkshops are yearly conferences that my institute, the Leibniz Institut für Astrophysik (AIP) organizes about once a year. They focus on a specific subject that is near and dear to a certain subject in science that the institute is doing and tries to get the best researchers in that subject to share the expertise on it.

This time it was about 3D Spectroscopy and IFU surveys focusing on galaxies and their evolution (the program also shows links to some of the powerpoint presentations that were given). Considering that my research group is called “3D Spectroscopy” you’d think that I would have been in the LOC, presenting 8 posters and have a long talk on the subject. But, nah! I didn’t even register. Part of it is, that the instrument I am working on and with which I will actually to 3D science (MUSE) is still under construction and will go on the Very Large Telescope mid 2014. The other part is that I feel that such a broad subject of galaxy surveys, even under the IFU umbrella, is too broad and the individual contribution would get lost in the fold.

However, I was thankful that I was able to attend two sessions and I was happy to do so. I want to focus this blog post on the subject of surveys, mainly because AGN/feedback might not be of that much interest to the broad audience, but do really feel that in the future with all these new instruments coming online, there might be a paradigm shift ocurring in which we do observational astronomy. I will talk a bit about the different talks that were presented that day. It was a bit overwhelming, so this blog post also helps me gather my thoughts on that session, trying to read up on it on the web. Times will be exciting in the future, for sure!

I really liked this Wednesday morning session. While there was relatively little science being discussed when presenting these surveys, it is amazing what kind of statistically complete samples are coming up. We are truly moving away from gazing at our favorite handful of objects with an IFU and going toward large 1,000-10,000 galaxy surveys that try to be as unbiased as possible in their selection criteria beyond the capabilities of the instrument that define them (field of view, wavelength range, resolution, etc.).

One of the biggest already undergoing surveys of about 800 nearby galaxies (z=0.005-0.03) selected from SDSS. Its observations are done with the PMAS in PPAK Wide Field mode with about 1700 spectra per galaxy. One of the thing that sets it apart is that it has no bias in the types of galaxies it is currently observing, as opposed to e.g. SAURON, which only observed ellipticals. The survey is undergoing and has observed about a third of the whole sample. The first data release is expected in November 2012. So this really constitutes a complete IFU survey of galaxies in the local Universe; and hey, who knows, maybe something new will come out, just like slow/fast rotator characteristic found in the SAURON galaxies. Let’s keep our eyes peeled for the early results!

What is special about SAMI is that it uses hexabundles. These are optical fiber bundles with independent cores (here 61), with a >75% fill factor and <0.5% cross talk ratio. Each core as a 1.6″ diameter and the whole bundle then has a 15″ diameter. Currently there are 13 bundles which are placed with the 2dF connector, but in the future HECTOR will want to place hundreds of bundles – maybe a sort of 3-dimensional 2dF. The main science drivers of SAMI are very similar to CALIFA, only that they want to observe about 3000 galaxies over the next few years (they only just had their first light). While the resolution might be a bit coarse, I think the statistical nature of this huge sample will be truly impressive.

MANGA stands for “Mapping Nearby Galaxies at APO” in which they gather the individual BOSS fibers into a big fiber bundle. Well, we heard that CALIFA is doing about 800 galaxies, SAMI will do 3000, why not go for 10,000, right? As such, it would provide THE z=0 benchmark! However, this survey not is expected to go underway before sometime in 2014 and there are still enormous technical and characterization challenges to be overcome (e.g. biases in having an IFU of different sizes). 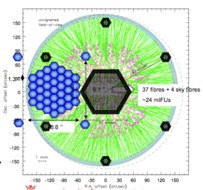 This was a really early presentation for the next generation IFU for the William Herschel Telescope. It aims to be the complement to 4MOST in the North. It would have about 1000 1.3″ fibers over a 2 degree field of view enabling it to do coarse IFU science. It is envisioned to work together with the blind HI APERITIF survey on large scale scienceSince the project is still in an early development phase many specifications were still open, but it was interesting to see what is in the pipeline for the future.

This was a summary of the project started here at AIP on the Disk-Mass project trying to measure the mass in 40 spiral galaxies beyond simple rotation curves. It is because of this idea that the PPAK Wide Field Mode was installed at the PMAS instrument. IFU technology along with ancillary data such as HI maps were needed to disentangle all the different components contributing to the mass (gas, stars and dark matter). The science results are fairly uncontroversial, gas sigma remains constant, stellar sigma declines (exponentially for almost all) and dark matter profiles resemble NFW. Well, at least we’re glad the Universe is still in order.

This is a huge survey that has been in preparation for years which will image the sky blindly. We (I am part of the science team) will expect to see a million Lyman Alpha Emitters, another million OII emitters plus another huge number of random other objects. I am actually very interested in the random AGN population found this way. The 150 VIRUS fiber bundles which are used for HETDEX work on the 3500-5500 Angstrom wavelength regime, enough to find significant Lyman Alpha Emitters to test principles of Dark Energy, which is the main driver for this survey. Unfortunately HETDEX has been plagued by delays, but we expect the survey to go underway in 2013/2014 and the Pilot Survey has already been quite successful. While MUSE is deep, HETDEX is wide!

There wasn’t that much focus on HECTOR, the instrument, in this talk. It is basically an extension to SAMI with way more hexabundles carefully placed with a starbug positioning sytem (shown with a really neat movie, but I can’t find it on the web right now). Its ultimate goal will be to have a 3D view of 100k galaxies.

However, Joss really went into the philosophy of these huge surveys. He quoted T.H. Huxley – “The great tragedy of science – the slaying of a beautiful hypothesis by an ugly fact.” One can look at that in two ways, first that the great thing about science is that we just don’t believe in beautiful things, we believe in provable theories. But secondly that the fact that something weird happening in your favorite galaxy does not necessarily mean that something like Lambda CDM is suddenly disproved. In the Universe this means that one can just look at the big picture by looking at large number of objects. And the whole means doing huge surveys, not just 20-30 object surveys being done up until now with IFUs. 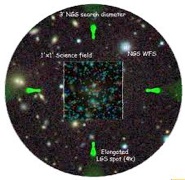 Considering that I am so entrenched in this project, it is hard to give an unbiased view on the presentation given here. The basic characteristics of the instrument were given: 300×300 cube covering the full optical range with a 2.5 Angstrom resolution with a one square arcminute field of view. But it is hard to really hit home what makes this instrument so special, how awesome it will be. When you are used to 8″x8″ fields, the enormous step to 1’x1′ is hard to fathom. People were fixated on the AO capabilities (it will have AO enhanced seeing with 4 LGS stars improving the seeing by double). But beyond that is the enormous cosmological volume the survey will cover. You will definitely hear me rave about the instrument some more in the future!

KMOS will be the new near-IR IFU survey spectrograph installed on the VLT next year. It combines the MOS concept with the IFU concept in the near-IR and will replace SINFONI, which only covers one galaxy, to 24 mini-IFUs in a 7’x7′ field of view. Unfortunately the talk focused a lot on the science doen with SINFONI in the SINS survey, that there was little time to really go into KMOS, the instrument. However, the science goals for KMOS will be similar – do large surveys of relatively high redshift (z~2) galaxies.